Celebrate the storied history of the New York Yankees.
From Jackson to Jeter, this magazine covers it all. Exclusive interviews with Yankee greats along with never-before-seen photos and memorabilia. Sign up to receive free eNews, tips and special offers from Sports Collectors Digest and download this magazine now.
Get it Free!
July 24, 2008 | Brian Earnest | Comments: 0

Arizona Cardinals star wideout Larry Fitzgerald is only 24 years old, but he’s certainly no rookie when it comes to sports collectibles. It’s probably inevitable that a standout athlete who grew up around professional sports would acquire a taste for sports memorabilia, and that’s certainly the case with Fitzgerald, one of the most talented and likeable young stars in the NFL. 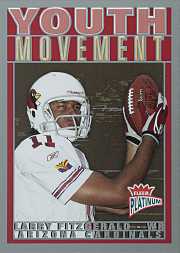 Fitzgerald was raised in Minnesota and served as a ballboy for the Minnesota Vikings, rubbing elbows with the likes of Chris Carter and Randy Moss, who no doubt had some influence on his path to pass-catching stardom. But Fitzgerald was an equal opportunity fan, filling the walls of his bedroom with Twins and Timberwolves memorabilia, as well.

“I was a big Minnesota Twins fan, and I had a Kirby Puckett ball, Kent Hrbek, Dave Winfield … that’s kind of where I started my collection,” said Fitzgerald. “My favorite was Kevin Garnett because of everything he brings to the table. I still have a life-size poster of Kevin Garnett. I kept a lot of things that are dear to me. I had a Chris Carter jersey, Randall Cunningham jersey, Warren Moon jersey, Robert Smith … And, of course, a Randy Moss jersey.”

After two record-setting years at the University of Pittsburgh, Fitzgerald himself will likely became the subject of many collectors searching for his highly coveted signature.

While fame in the world of collectibles isn’t a high priority for him, Fitzgerald understands the level of excitement collectors reach because he’s not that far removed from being one himself.

Fitzgerald’s father, Larry Sr., has been a (radio and television) sports personality in the Twin Cities area for more than 20 years, making Larry Jr. very familiar with the ins and outs of the media business. It’s that understanding of the behind-the-scenes nuances that has helped the younger Fitzgerald become one of the most polite and forthcoming interview subjects from any sport, a rarity among standout professional athletes these days. 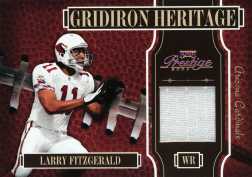 Although a postseason victory would ultimately be more rewarding to him, seeing himself on his first trading cards was a significant day he’ll never forget.

“I finally felt like I arrived and had become what I always dreamed about becoming. That was sort of like my initiation, I guess, to being in the NFL,” he said. “It was like a dream come true … It’s still sort of funny to see myself on a trading card.”

These days, Fitzgerald has plenty of opportunity to collect autographs and other memorabilia from other athletes at events like the 2007 Pro Bowl, where his breakout 100-catch, 10-touchdown season earned him a trip to Honolulu. Instead, though, he prefers to pick things up on his own, paying retail for things he really wants, rather than hitting up other athletes for freebies. Those types of purchases were certainly made easier recently after he signed a new four-year, $40 million contract (the highest contract extension ever given to a non-quarterback).

“If I really want something, I will go get it from a store. I know what it is like with athletes always getting bombarded with requests for autographs,” he said. “I try to get more information than anything (from other athletes), get to meet them and find out what makes them so great.”

Fitzgerald says he makes it a point to sign as many autographs as he can for his fans, and understands what makes collectors tick. As long as autograph seekers are polite, they will probably get him to sign.

“Sometime at dinner it can be bothersome when you are trying to eat with your family and friends, but I know this is a fan-based business, and fans are the reason our game is the way it is,” he said. “I always try to be as open as possible and try to give the fans everything they want.”

Fitzgerald admits he has more than a passing interest in collecting some more marquee autographs himself, both as a hobby and an investment. “I’ve been talking to my financial adviser,” he said. “With the stock market not doing well … a Babe Ruth baseball or a Mickey Mantle baseball – there isn’t many of them out there and you can’t duplicate that. I know over time it’s probably going to be a good investment.”