Celebrate the storied history of the New York Yankees.
From Jackson to Jeter, this magazine covers it all. Exclusive interviews with Yankee greats along with never-before-seen photos and memorabilia. Sign up to receive free eNews, tips and special offers from Sports Collectors Digest and download this magazine now.
Get it Free!
September 23, 2008 | admin | Comments: 0

The NFL season has just begun, but Brett Favre is already a hit on Broadway.

On the day he was dealt to the Jets, NFLShop.com reportedly sold 6,500 Favre jerseys, smashing its previous single-day record for one player (900 Tony Romo jerseys were sold on Nov. 11, 2007).

Yes, the Big Apple is abuzz with talk of the new quarterback in town.

“I think it’s the first time in a while that ticket holders are excited about going to a Jets game,” said Dan Levy, vice president of Grandstand Sports in New York.

But what about sports card and memorabilia businesses in Gotham? How are Favre items selling in these establishments?

“I rarely sold any Favre cards here, but since the trade, collectors have been buying the Packer cards. They’ve been looking for Favre rookies,” said Mike Fata, owner of BBC Galaxee in the Bronx.

“There’s definitely a buzz about Brett Favre. All of a sudden, Brett has put the Jets not only back on the football landscape, but has made the Jets a marketable team again,” he said.

“I don’t think the rush for his cards has hit yet,” said Steve Bistany, owner of Steve’s Sports Card, Coin and Stamp Shop in Rutherford, N.J..

“There’s no big rush for his stuff,” said Mike DeLuca, owner of The Strictly Mint Card Company, Inc., a mail-order business in Smithtown, N.Y. “Most people that want a Brett Favre card already have one.”

Perhaps one reason why there hasn’t been a universal rise in demand is that cards with Favre in a Jets uniform are just starting to hit the market.

“A lot of people that are Jets fans are coming in and asking for Favre Jets cards,” said Alex Gregg, owner of Alex’s MVP Cards in New York.

“So any cards picturing him in a Jets uniform are going to sell.”

At press time, card companies were scrambling to get cards of Favre as a Jet into their products. The legendary signal-caller will make his Donruss Jets debut in the retail Playoff Absolute Memorabilia product.

Favre’s first Topps Jets appearance will be in the Mini Team Sets product. Upper Deck has inserted exchange cards for limited-edition Immortal Letterman cards in its NFL Icons product. If a collector completes the set, the Letterman cards will spell out “Broadway Brett.”

Virtually no autographed Favre Jets memorabilia has hit the market. Steve Pemper, owner of Ball Four Sports Collectibles in Milwaukee, Wis., has done signings with Favre in the past, but said he is still waiting for Jets items.

David Thomason, part owner of Fan 4 Ever in Sun Prairie, Wis., is also waiting. He has worked with Favre on the majority of his signings in the past 12 years and also operates Favre’s website (www.officialbrettfavre.com). Thomason is uncertain how many Jets items Favre will sign and when they will become available. He has heard that a limited number of items will be inked, and that all proceeds from these will go towards a foundation formed by Favre and his wife, Deanna.

“As of now, Brett hasn’t signed any Jets items, except stuff for fans that have run into him at practice or whatever. I’m not expecting delivery of anything until right around the middle of October at the earliest,” Thomason said.

Favre’s official website will likely be the first place collectors will see signed Jets items, Thomason said. The hobby veteran is accepting pre-orders for signed helmets and jerseys through the site.

But while New Yorkers are eager to add Favre items to their collection, what about his fans in Wisconsin? How do they feel?

“As a fan, I would’ve loved to have seen him retire in a green-and-gold jersey, but you know, so be it. I actually purchased a Favre Jets jersey for my father for his birthday,” said Troy Jilot, a die-hard Packers fan who has completed the Favre Rookie Set on the PSA Set Registry.

“I still like him. I’m a Packers’ fan first. When he’s on TV, I’ll watch, but I probably won’t go out of my way to watch Jets games,” he said. “But it’s not like I’m going to get rid of all my cards.”

Brian Anderson, a co-owner with Thomason of Fan 4 Ever in Sun Prairie, Wis., says the trade has actually had a positive impact on sales in his store.

“We’re selling a lot of the Green Bay stuff and now, of course, we have the whole New York market as well,” he said.

Jeff Price, owner of Price’s Sports Collectibles in Greendale, Wis., says that local sales of Favre items have slowed, but Internet sales have picked up.

“I’ve been doing a lot better on eBay with his autographs and patches and jerseys,” he said. “But here at the store it has slowed down. The regulars that collect him still collect him, but the casual fan has kind of stopped.”

Price does have customers looking for Favre Jets items and plans to stock them.

“Pretty much every Jets item I have coming in will be sold instantly,” he said.

Of course, Favre also has fans outside of Wisconsin and New York. Cole Hawkins, manager of Fan Headquarters in Horn Lake, Miss., says Favre items are steady sellers at his store.

Steve Chou, owner of Galaxy Stores in Naperville, Ill., says that since Favre’s retirement announcement, his rookies have sold well.

Suiting up for a team in a big market like The Big Apple could also impact the value of Favre’s cards and memorabilia.

“If he brings them the Super Bowl, he will be more of a legend here than in Green Bay,” said Fata.

On the other hand, if Favre doesn’t play well, the value of his cards could plummet.

“If he goes in the tank and the team goes 3-13, you’ll see the opposite direction. They turn on everybody quickly in New York,” said DeLuca.

So while Favre has been a hit in New York so far, it remains to be seen if his on-the-field performance keeps his name up in lights, or turns him into a Broadway bust. SCM 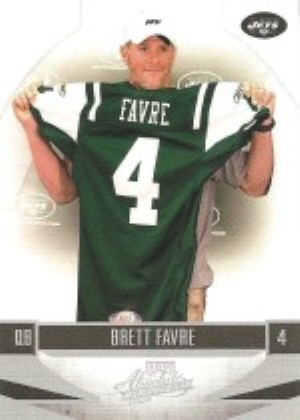