Celebrate the storied history of the New York Yankees.
From Jackson to Jeter, this magazine covers it all. Exclusive interviews with Yankee greats along with never-before-seen photos and memorabilia. Sign up to receive free eNews, tips and special offers from Sports Collectors Digest and download this magazine now.
Get it Free!
September 23, 2008 | admin | Comments: 0

Thousands of sports memorabilia videos can be seen on the popular website YouTube (www.Youtube.com). Unfortunately, many of the videos contain little or no “production” value, which makes them difficult to watch.

True, some collectors might not have the time or the inclination or the basic equipment to produce a more polished piece. But, with a modest amount of effort, a more professional video can be achieved.

Presuming a person wants to put together a video, and they already have access to a compatible computer and video camera, and perhaps some accessories, utilizing one or more of the following pointers should greatly improve the end product:

EQUIPMENT
Tip #1: “Use a tripod for steadier shots,” recommends independent videographer John Urman. “Making hand-held camera work look good is a learned skill and good camera work does not call attention to itself, but bad camera work does.” Bumpy camera can be the result from an unbalanced or misused tripod but, generally, productions are better with tripods.

Internet and TV professional Mark Boszko also appreciates a tripod’s benefits. “When you compress a video for the web, the less motion there is, the better,” noted Boszko. “A tripod keeps the background still and lets viewers focus on what’s most important in the video: you and your collectibles.”

Tip #2: “Try an external microphone to isolate people talking,” urged Urman. The external mic, not the one built-in to the camera, often greatly minimizes other sounds in a room that might compete or distract from the main subject.

“At just a few feet from someone, the built-in camera mic can give you hollow (bad) audio,” said Urman, the writer/director/producer of the award-winning cycling video “On The Canal.”

“The best, cheapest way to get strong audio when speaking to a camera is very simple,” added Erik Swanson. “Go to Radio Shack and buy a wired lavalier mic.” The Boston-area independent video producer said decent “lav” mics cost around $50.

Tip #3: Lights are your friend.
“Video soaks up light, and many darker images lose detail without light, especially video that is compressed for the web or on a DVD,” said Jennifer O’Rourke, the managing editor of Videomaker magazine.

“You don’t have to have the pro gear, but lights will always make your video better, especially if you’re shooting for the web,” said the six-time Emmy winner. “If your item is small, try using two table lamps using the same wattage (about 60 watts), one on each side of the item, off-screen, at about 45-degree angles from the item, to erase shadows and bring dark detail into the light.”

Swanson extolled the virtues of fluorescent lights, which are ideal for video and easily found at “big box” hardware stores. “They’re cheap (around $50), cool temperature-wise and they work great,” Swanson said.

It’s also a good idea to always do a good white-balance with your camera to obtain realistic looking colors for each different lighting set-up.

STRATEGY
Tip #4: Remember, you are a storyteller. Ideally, O’Rourke said, the tale flows with “a beginning, middle and end, and every shot you use needs to move your story along.”

Tip #5: The video’s “venue” and length are crucial to the project. “Where you show your video should be considered before you begin to shoot it,” O’Rourke emphasized. “The longer the video, the longer it might take to load, and the more likely your viewer will change his mind and move to something else. The attention span here should be about 5 to 20 minutes, depending on the subject and the video networking site you’re showcasing it on.”

O’Rourke noted YouTube has some basic constraints to keep in mind. “They limit the length of your video and they compress video so low that, sometimes, even good video can look bad.”

Tip #6:  Be efficient with time. Make a list of the collectibles and organize them beforehand to help maximize the recording process.

EASY ON THE EYES
Tip #7: Stage a “studio.” A table five feet or more from the wall and a generic background helps minimize shadows. As O’Rourke put it, “A bland background also compresses better than a busy background, making your showcased items stand out better.”

Tip #8: Good shot composition is a must. “Too much or too little headroom looks wrong,” said Urban. “You might already have an innate sense of proper headroom (the distance from the top of a person or object’s “head” to the edge of the TV or computer screen it’s watched on), but if not, watching the news should show you good headroom framing.”

O’Rourke said a solid variety of shots, both in look and length, within reason, are also a bonus. “Give the viewer several angles to see the collection, and don’t forget the extreme close-up, if you can achieve this. Different angles add interest,” she said.
However, O’Rourke cautioned against overusing the zoom feature. “Every time you make a movement, the viewer will notice the camera movement, rather than the subject you’re showcasing,” she said.

Tip #9:  Learn to edit. “Something as simple as iMovie or Windows Movie Maker can really help your project sing,” said Boszko, editor of many History Channel programs. “Trim your video to only the best parts. Folks are much more likely to watch your entire video if it’s short, sweet, and to the point.”

To ease the editing process, Boszko stressed the importance of having “cut-aways.” “You don’t need to have two cameras to make it look like an expensive two-camera shoot. Instead of zooming in and out in a single continuous take, just shoot a single wide shot of your main shot, then go back and shoot close-ups of the cards or collectibles you want to feature,” he said. “Then when you go to edit your video, ‘cut-away’ to the close-ups of the cards you’re talking about.”

When all the elements come together and you’ve kept the audience’s interest,  “you’ve told the story well,” said O’ Rourke, SCM 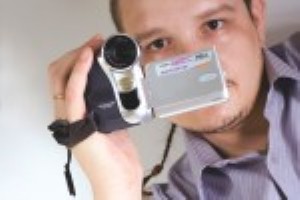