Celebrate the storied history of the New York Yankees.
From Jackson to Jeter, this magazine covers it all. Exclusive interviews with Yankee greats along with never-before-seen photos and memorabilia. Sign up to receive free eNews, tips and special offers from Sports Collectors Digest and download this magazine now.
Get it Free!
October 15, 2008 | admin | Comments: 0 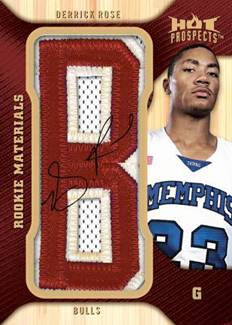 There are two other key rookie-themed inserts that pack plenty of sizzle. First are the “Rookie Materials” autographed letter patch cards that will afford collectors the opportunity to put together the player’s full name or team name. Hoop fans will also see the return of the extremely innovative autograph insert set, “Draft Day Postmarks.” This set will be limited to just 50 copies of each card.

If the opportunity of finding autograph cards of the top rookie talent wasn’t enough, 2008-09 Upper Deck Hot Prospects keeps the heat on with other exciting autograph inserts. The “Numbers Game” are comprised of autograph memorabilia cards numbered to the players jersey and spotlight top stars like Carmelo Anthony, Kevin Durant, Kobe Bryant and LeBron James. There are two parallel versions of these cards numbered to 25 and 1.

“Sweet Selections” cards chronicle where some of the biggest stars were picked in the draft and include names like Chris Paul, Baron Davis, Dwight Howard and Yao Ming.  The “Road to Springfield” set is a tribute to the players already enshrined in the Basketball Hall of Fame or those who are destined to arrive there featuring autographs of Jerry West, Julius Erving, Kareem Abdul-Jabbar, Larry Bird and Michael Jordan. Both the “Sweet Selections” and “Road to Springfield” cards will be numbered to just 25 copies with parallel versions numbered to 10 and 1.

“The world was captivated by NBA talent this summer during the Beijing Olympics,” said Tone Stakes, Upper Deck’s associate brand manager for Basketball. “The talent that this rookie class will bring at tip-off time will likely catch their attention again. Some of the most sought after rookie cards in the market will surely come from 2008-09 Upper Deck Hot Prospects Basketball when the season begins. Pick them up now before they get any hotter.” 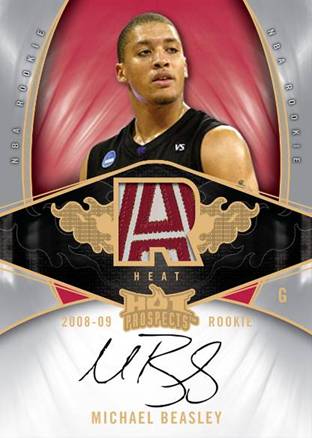 CONTENT HIGHLIGHTS:
o       Find one Autographed Rookie Patch per box! (on average)
o       Find 2 additional autograph and/or memorabilia cards per box! (on average)
o       Look for Hobby-exclusive Autograph and Base Set parallels!
o       Find Rookie Materials autographed letter patches and the return of Draft Day Postmarks, signed by the top rookies and limited to 50 copies!
o       Each box contains a variety of box-break inserts, including Cream of the Crop, Hot Tandems, Alumni Mates and Supreme Court!