Celebrate the storied history of the New York Yankees.
From Jackson to Jeter, this magazine covers it all. Exclusive interviews with Yankee greats along with never-before-seen photos and memorabilia. Sign up to receive free eNews, tips and special offers from Sports Collectors Digest and download this magazine now.
Get it Free!
September 9, 2008 | Russ Cohen | Comments: 0

The NBA recently trotted out 34 of its future stars in New York to get pictures taken for their first trading cards. Well, it was more than pictures; players were busy signing as well. It’s one of the players’ first chances to start to create a connection to the new fans that await them when the 2008-09 season opens in a few months. 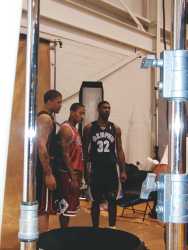 Many players grew up collectors, but for those who didn’t, like the first overall pick of the Chicago Bulls, Derrick Rose, there was still an understanding what he now means to the hobby.

“It feels great. We always talk, we are all kind of close friends and just to know that we can all be playing against each other it won’t do anything but make us have fun,” Rose said. “Yeah, I love it knowing that little kids will be trading cards for me or trying to trade someone just to get my card or to find my card.”

Plenty of kids always find their way into this event — usually because of contests they have won or because their parents work with the league. Whatever the reason, the players are always willing to sign for them.

“Yeah, this is great. I am around kids, so it’s real fun,” said the second overall pick by the Miami Heat, Michael Beasley.
Star players will always be collected, but it’s fun to see who some of the top picks used to spend their allowance on.

“I used to collect cards when I was very young,” said Ryan Anderson, the 21st overall pick by the New Jersey Nets. “Larry Bird and Magic Johnson, I think like all kids I used to collect those type of players.” 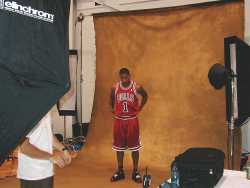 The day is long and many of these players aren’t used to being male models.

“It’s kind of fun, but the crazy part is we have been here for at least eight hours, so that’s the tough part,” said Eric Gordon, the seventh overall pick by the LA Clippers. “You just have to get used to it.”

Topps had a great setup, as usual, and they brought some exclusive artifacts with them to spice up some future products.

“Many of the guys who played in the McDonald’s All-American game when they were in high school, we got those jerseys and they will be signing letters of their last names,” said Topps assistant basketball brand manager, David Enslee. “Topps Basketball hits the second week of September.”

Upper Deck used some new photo techniques that should make their cards pop when the collecting season begins. Upper Deck’s first product with these shots will be Top Prospects, which is also due out in September.

“We’ve got some of the retro jerseys, then we are shooting them over at our white seamless. In the memorabilia area there is stuff that they are signing for current and retro jerseys,” said Gary Tolle, Upper Deck’s manager of the creative sports department.
At least one player was amazed at what the card companies were asking him to do and how the cards were turning out.

“To see myself actually on a card coming out here and doing the different photo shoots with the different card companies is pretty cool,” said the Grizzlies’ Kevin Love, the fifth overall pick. “They tried to have me outlet passing the ball and that’s hard to do —  trying to emulate that on a card. They have us dunking, doing certain stuff like that, and dribbling, and throwing passes. The stuff that they do is pretty cool with the backgrounds and the lighting and they make for a pretty good card.” 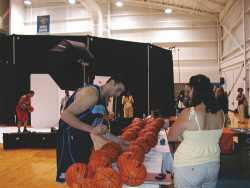 “It’s a blessing and I am very happy that I made the NBA,” added Kosta Koufos (23rd overall pick by the Utah Jazz. “I am working hard and this atmosphere is fun. I used to collect baseball cards, and basketball cards all the time with my friends. It was a good experience and a way to make conversation with people and it’s a way to get a card that you want to get. I collected a variety.”

Some of the draftees talked about their collections with pride and how they used to protect the cards that were very important to them.

“I collected cards as a kid and I actually still have them,” said Courtney Lee, the 22nd overall pick of the Orlando Magic. “Mine are put away in a binder with the plastic covers on them. I would try to go out and get everybody’s rookie card. If it was a player that was making an impact, I would try my hardest to get that card.”

Some people collect with the sole purpose of selling those items down the road, but not Lee.