Celebrate the storied history of the New York Yankees.
From Jackson to Jeter, this magazine covers it all. Exclusive interviews with Yankee greats along with never-before-seen photos and memorabilia. Sign up to receive free eNews, tips and special offers from Sports Collectors Digest and download this magazine now.
Get it Free!
September 29, 2008 | admin | Comments: 0

In 2008-09 MVP Basketball, Upper Deck is celebrating the reigning NBA MVP with a special insert set that chronicles every NBA game Kobe played last season. With these cards falling one in every other pack, fans of the “Black Mamba” should enjoy putting together this set with relative ease. Upper Deck has added a special chase element to this release by including exchange cards for framed uncut sheets of the Kobe Bryant MVP set.

Each eight-card pack of MVP carries a suggested retail price of just $1.99 and averages 24 rookie cards and one game-used card per box. There are a variety of exciting chase elements in 2008-09 MVP Basketball like dual autograph cards, patch cards and rare “1-of-1” cards that are sure to make basketball collectors stand up and cheer.

“The main goal behind 2008-09 MVP Basketball was to deliver significant value and I think we’ve accomplished that,” said Tone Stakes, Upper Deck’s associate brand manager for Basketball. “Basketball fans can find a rookie card in every pack, a Kobe Bryant MVP insert card in every other pack and plenty of other exciting content. Most Americans are tight with their pocket books right now, but 2008-09 MVP Basketball provides them with an affordable and enjoyable collecting experience.” 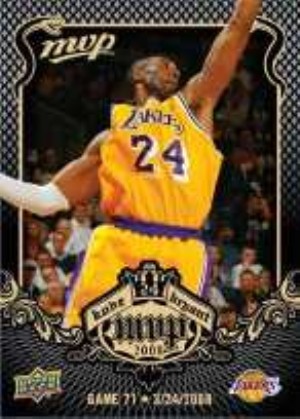