Celebrate the storied history of the New York Yankees.
From Jackson to Jeter, this magazine covers it all. Exclusive interviews with Yankee greats along with never-before-seen photos and memorabilia. Sign up to receive free eNews, tips and special offers from Sports Collectors Digest and download this magazine now.
Get it Free!
September 9, 2008 | admin | Comments: 0

Time is running out on Yankee Stadium and for collectors to assemble the massive Yankee Stadium Legacy series from Upper Deck. The 6,661-card set chronicles every single home game ever played at Yankee Stadium since its doors opened in. 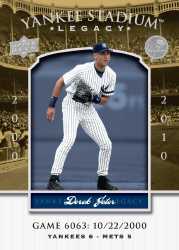 With all of the cards now available in 2008 Upper Deck Baseball products, the company is offering a few more incentives for those who complete the set. The first five collectors who can put together the complete set and present it to Upper Deck for validation will win a “Yankee Dream Day” at the new Yankee Stadium, along with a private meet-and-greet with Upper Deck exclusive spokesman Derek Jeter next season.

Since Upper Deck’s Yankee Stadium Legacy set includes only Yankee home games through the 2007 season, the first five lucky collectors who put together the set and have it validated will also receive each of the insert cards chronicling the 2008 season to complete their sets. The Yanke Stadium Legacy cards representing 2008 will appear in 2009 Upper Deck Series One Baseball next February, thus putting an end to the Yankee Stadium Legacy promotion.

Here are the instructions for those who complete the Yankee Stadium Legacy series:
1.    Contact Chris Carlin, Upper Deck’s hobby marketing manager at (702) 633-0775 or chris_carlin@upperdeck.com to officially submit your claim.  All claims must include a photograph or video of the collection.
2.    Once the claim has been officially submitted and ranked in the order it was received, the collector will have seven days to ship the set and provide corresponding tracking information.
3.    After receiving the set, Upper Deck will validate the collection within five business days and immediately notify its sender.
4.    Upper Deck will hold the complete sets until all five winners have been validated and notified.