Celebrate the storied history of the New York Yankees.
From Jackson to Jeter, this magazine covers it all. Exclusive interviews with Yankee greats along with never-before-seen photos and memorabilia. Sign up to receive free eNews, tips and special offers from Sports Collectors Digest and download this magazine now.
Get it Free!
September 19, 2008 | admin | Comments: 0

"The exciting part for collectors with 2008 Upper Deck Ballpark Collection is that it is only available in hobby shops and the product
is limited," said Jason Masherah, Upper Deck’s senior brand manager. "That means collectors will have a much better opportunity of pulling some of the more unique inserts like the logo, tag and button cards. These cards really bring sports fans closer to the player as well as the game."

Also found in the 2008 Upper Deck Ballpark Collection are the Yankee Stadium Legacy insert cards. Additionally, 2008 Upper Deck Ballpark Collection will be the only baseball release of the year that has the ultra-rare Moments in Time Dual Cut Signatures cards of famous personalities tied to Yankee Stadium, such as Pope John Paul II and Pope Benedict XVI, who both celebrated mass there. 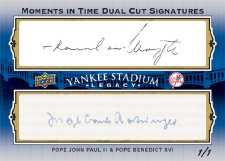 The other great insert in 2008 Upper Deck Ballpark Collection is the Signs of History exchange cards. This insert set features an authentic cut autograph of a former U.S. President and collectors have hailed these cards as some of the most valuable in today’s market. These cards have been selling for hundreds and sometimes thousands of dollars online and at shows.