Celebrate the storied history of the New York Yankees.
From Jackson to Jeter, this magazine covers it all. Exclusive interviews with Yankee greats along with never-before-seen photos and memorabilia. Sign up to receive free eNews, tips and special offers from Sports Collectors Digest and download this magazine now.
Get it Free!
March 31, 2009 | admin | Comments: 0

The Upper Deck Company is used to getting the best of the best into each of its baseball card sets. Top rookies, current superstars and proven legends are routinely featured. But in this year’s MLB Spectrum release, which hit store shelves earlier this month, Upper Deck took the “star” element one step further and actually sought out Hollywood performers, reality TV stars and bigger-than-life personas to include. The likes of silver screen legend Burt Reynolds, reality TV star Kim Kardashian and professional wrestler Brutus Beefcake are just three of the entertainers included in Upper Deck’s highly sought-after “Spectrum of Stars” autographed insert set. 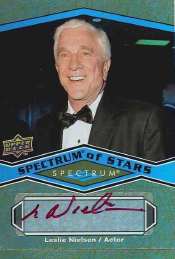 “This was an opportunity for us to include some unusual, never-before-seen autographed trading cards of performers outside of sports,” said Gabriel Garcia, Upper Deck’s associate baseball brand manager. “It’s certainly something different to open up a pack of baseball cards and find an insert card with ‘Terminator’ star Linda Hamilton’s signature on it.”

The 22-card collection, which utilizes vibrant rainbow foil board on every card, provides a short bio of the featured celebrity on each card back, accompanied by a standalone image and the star’s genuine signature on the front. In addition to the aforementioned stars, the set also includes comedians Cheech Marin and Tommy Chong; “Naked Gun” star Leslie Nielsen; “Married with Children star Ed O’Neill; “Baywatch” babe Erika Eleniak; musician Lita Ford and even former “F-Troop” star Larry Storch!

The product packs out two autograph cards per every hobby box, on average, with one of the autographs falling from the “Spectrum of Stars” collection. Special die-cut autograph versions from each of the featured stars are also included, so Hollywood buffs everywhere will be on the lookout for those rarer keepsakes as well. The product is available in stores now.