Celebrate the storied history of the New York Yankees.
From Jackson to Jeter, this magazine covers it all. Exclusive interviews with Yankee greats along with never-before-seen photos and memorabilia. Sign up to receive free eNews, tips and special offers from Sports Collectors Digest and download this magazine now.
Get it Free!
October 14, 2008 | admin | Comments: 0

When it comes to finding sought-after autograph cards in every box, cUpper Deck’s 2008 SP Authentic Baseball launch hits the target. This 100-card regular set is complemented by an impressive assortment of autograph cards. Marquee inserts like Rookie Jersey Autographs, SP Chirography (including dual, triple and quad variations), “Sign of the Times” and even the “Signs of History Presidential Cut Signatures” provide a vast array of scrawls that will fan the collecting fires of any hard-core baseball card hobbyist. 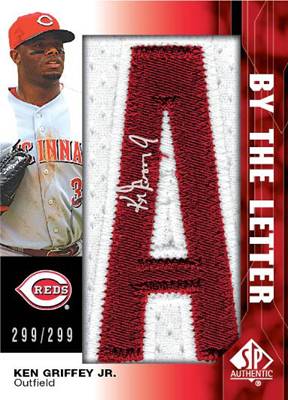 “This year’s SP Authentic Baseball set boasts some of the most collectible rookie cards in the industry,” said Jason Masherah, Upper Deck’s senior brand manager. “But just as in years past, it will be the wide selection of autograph cards that will keep collectors cracking packs for more.”

Another popular autograph insert card that’s making a repeat visit in this year’s SP Authentic offering is the “By the Letter” line. This impressive insert showcases the featured player next to an autographed jersey letter and packs out at a rate – on average – of one in every box. The rookie autograph lineup is comprised of Rookie Jersey Autographs, numbered to 999 or less, along with “Rookie Autographs,” also numbered to 999 or less. Tampa Bay’s likely Rookie of the Year candidate Evan Longoria headlines the list of upstarts included in this assortment.

“The 2008 Major League Baseball season has been tremendous so far with the Red Sox, Rays, Phillies and Dodgers still in contention,” said Masherah. “We’ve had some exciting, improbable situations to get us to where we are right now with the playoffs, and our SP Authentic brand helps celebrate the best that baseball has to offer.”

In addition to its unparalleled collection of autograph cards from baseball’s current superstars, including the likes of Derek Jeter and Albert Pujols, SP Authentic Baseball includes inserts like Authentic Achievements and Marquee Matchups (up to 12 of both per box, on average), along with Yankee Stadium Legacy cards that celebrate the historic venue’s last season. The popular YSL cards pack out at a rate of four per box, on average.

Last but certainly not least inside 2008 SP Authentic Baseball’s mixture of pack-cracking inserts are the Presidential Predictor Vice-Presidential cards of Republican Sarah Palin and Democrat Joe Biden. Both short-printed cards are tongue-in-cheek caricatures that celebrate this year’s Presidential election. Palin is pictured on a dog sled, holding a fishing pole and wearing a tiara, while Joe Biden is transformed into Hall-of-Fame pitcher Walter Johnson, himself a former Washington Senator.

The 2008 SP Authentic Baseball product carries a suggested retail price of $4.99 per five-card pack with 24 packs per box. The product is available in stores now.

o        One By the Letter Autographed Patch card per box, on average!

o        One Autographed rookie card per box, on average!

o        Look for Autographed By the Letter cards from the 2008 USA National Team randomly inserted!

o        One Yankee Stadium Legacy Memorabilia Card in every case, on average!

Inserts and Parallel Cards (one per pack, on average)

Autograph and Memorabilia Cards (three per box, on average)