Celebrate the storied history of the New York Yankees.
From Jackson to Jeter, this magazine covers it all. Exclusive interviews with Yankee greats along with never-before-seen photos and memorabilia. Sign up to receive free eNews, tips and special offers from Sports Collectors Digest and download this magazine now.
Get it Free!
September 10, 2008 | admin | Comments: 0

According to a newspaper report, Arizona Diamondbacks managing general partner E.G. "Ken" Kendrick, is the current owner of the Holy Grail of baseball cards — the coveted 1909 T206 Honus Wagner once owned by Wayne Gretzky. 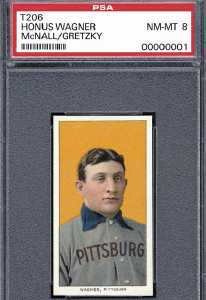 The card sold for a record $2.8 million in a private sale in September 2007 to a bidder than insisted on remaining anonymous. A year later, the owner’s name is being reported in the media for the first time.

According to a report in the New York Daily News, a sports collectibles industry source has confirmed that Kendrick was the winning bidder for the famous Wagner card. The card could wind up on display at a sports museum the D-Backs plan to open at Chase Field in the next few years.
Kendrick would not comment on the story when contacted via phone by the Daily News.

Gretzky and former Los Angeles Kings owner Bruce McNall helped the card’s fame grow when they owned it. Michael Gidwitz, a collector from Chicago, and Las Vegas businessman Brian Seigel have also owned the card. Seigel bought the card from Gidwitz for $1.265 million in 2000.
Seigel sold it in early 2007 to SCP Auctions and an anonymous Southern California collector for $2.35 million.

The card first surfaced in the hobby when veteran memorabilia dealer Bill Mastro of Mastro Auctions purchased it for $25,000 from a New York collector.