Celebrate the storied history of the New York Yankees.
From Jackson to Jeter, this magazine covers it all. Exclusive interviews with Yankee greats along with never-before-seen photos and memorabilia. Sign up to receive free eNews, tips and special offers from Sports Collectors Digest and download this magazine now.
Get it Free!
July 22, 2008 | Scott Fragale | Comments: 0

Can Atlanta Braves slugger Chipper Jones sustain his torrid pace and eclipse the magical .400 plateau? Can Jones remain injury-free during the twilight years of his already stellar career and go down in the history books as one of the best, if not the best, third basemen of all time and earn a plaque in Cooperstown?

Another vexing question for memorabilia collectors is: Will Jones’ memorabilia prices continue to gain momentum in the hobby, or have they already reached the summit?

For the answers to these queries, fans will need to stay tuned to the remaining three-plus months of the season and continue to consult our price guide pages, but one thing is for certain – Chipper’s resurgence has definitely left fans Jonesing for more. 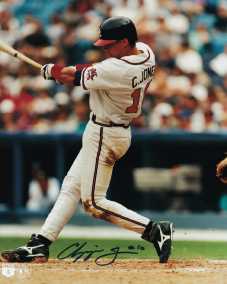 After bursting onto the MLB scene as the top pick in the 1990 Amateur Draft, Larry Wayne, aka “Chipper” Jones, has been quietly going about his business with the Atlanta Braves for 15 seasons. Because he’s resided in the Southeast and not the Northeast or one of those high-profile 90210 zip codes out West, Jones’ HOF-worthy credentials have gone relatively unnoticed by many fans over the last decade. But even a zip code from the Anchorage area couldn’t diminish his impressive 2008 numbers.

.400 To The Finish?
Through the first 60 games of the season, Jones had produced 15 home runs, 93 hits, a .504 on-base percentage and a scorching, league-best .420 batting average. Although he’s posted a career .310 average and has possessed one of the sweetest swings in the game since breaking into the bigs in 1993, few could have predicted he’d be making a run at history during his twilight years. The silky-smooth stroke and the outstanding eye demonstrated night in and night out make .400 a distinct possibility, but Jones is quick to remind us of just how difficult it will be to pull off the rare feat. (Only 35 players have finished a season with a .400-plus average, with most doing so before anybody knew what a telephone was. Ted Williams was the last to accomplish it, batting .406 in 1941).

“Hitting .400 is not a concern for me,” Jones said. “You’re going to run into enough Rich Hardens and Johan Santanas to keep that from happening. If I had hit .390 before in my career, then maybe. But I haven’t. When you’re a .310 career hitter, you usually hit .310.”

Whether you believe Jones is merely trying to avoid getting ahead of himself or is fully aware that .400 talk this early in the season is comparable to taking a chug from a bottle of milk after winning the pole at Indy, some observers do believe.

“I think he could do it, because I’ve never seen him so locked in from both sides of the plate as he is this year,” said one NL scout. “In the past, there were ways to pitch to Chipper and get him out. This year, even if you make good pitches, he can still get a hit.”

Brian McCann, Jeff Francoeur and fellow switch-hitter Mark Teixeira help comprise a potent Braves lineup that doesn’t afford opposing pitchers the luxury of pitching around Jones which, in turn, increases his chances of staying hot for the duration of the season.

For all of the factors seemingly in his favor, including what many believe is a dilution of quality MLB pitching across the board, those who follow the Braves on a day-to-day basis still believe the odds are stacked against Jones.

“I don’t think his chances are that realistic; it’s just so damn hard to do,” Atlanta Journal Constitution writer Tom Stinson said. “What might be different in these past two months is, he’s got it going from both sides of the plate (Jones is batting .444 from the right side, .404 from the left). Because his swings are so different – he even uses a different bat manufacturer for his right and lefty bats – he has said when he works something out on the right side, something always seems to go crocked on the left side. It’s the bane of the switch-hitter. But he’s had it going from both sides during this start, which is rare.” 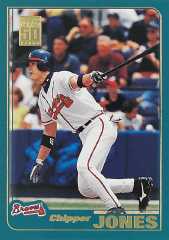 The Man Behind The Numbers
Equally rare is the makeup of the 35-year-old Florida native. Growing up the son of a college baseball coach, Chipper (given the nickname because he was often referred to as a “chip of the old block”) grew up playing shortstop, but made an easy transition to third base in the Braves farm system and has been patrolling the hot corner with above-average skills for much of the last 15 years. A cornerstone and team leader of the Atlanta organization and a major component in the team’s amazing run of 14 consecutive division titles (1991-2005), Jones remains the Braves most popular player despite an aversion to the spotlight.

What If?
The Braves dynasty may have never come to fruition had it not been for the team’s consistent struggles prior to the run. The Braves were reportedly set to take highly acclaimed high school pitcher Todd Van Poppel with the top pick in the 1990 Draft, but Van Poppel “pulled an Elway” and insisted he wouldn’t play for the lowly Braves if they did select him. The Atlanta brass instead opted for Jones, and the rest, as they say, is history.

Renowned Atlanta Journal Constitution columnist and former Sports Illustrated and The Sporting News writer Furman Bisher, who has been covering Jones since he first arrived in Atlanta back in 1991, is a firm believer in the “what you see is what you get” assessment in regard to the on and off-field personas of Jones.

“Chipper comes from a good family, and other than a mistake he made with a waitress (in 1998, it was revealed that Jones had an 18-month affair with a Hooters waitress which led to the divorce from his first wife, Karin), he’s always been a good kid who’s kept his nose clean,” Bisher said. “He’s not one who’s big on the flair for the dramatic, and he doesn’t look to call attention to himself. If anything comes up in the clubhouse, he’s always been affable and courteous to the press. I guess the best way to sum him up is would be to call him straight down the middle. That’s Chipper in a nutshell.”

The southern flavor and folksy nature of the Atlanta area seem to have been the perfect fit for Jones. Just 23 in his first full season with the big-league club, he has essentially grown up before Atlanta’s eyes and has emerged as the quintessential team leader for the perennial contender.

“He remains the same fan favorite that he was when he first got here. He’s  the lone holdover from the 1996 World Champion team and people remember that,” Stinson said. “He isn’t a ‘rah-rah’ presence in the clubhouse, but players like Francoeur and McCann say the conversations with him away from the park have been invaluable to their development as hitters.”

Cooperstown Calling?
With impressive lifetime totals (2,210 hits, 418 home runs) and better-than-most defensive skills (.957 fielding percentage), another question remains regarding Jones’ illustrious career: Is he Hall of Fame worthy? With six All-Star appearances, a pair of Silver Sluggers, an NL MVP award and a World Series ring already under his belt, many believe Jones has first-ballot written all over him. Others, however, feel his current résumé still needs a little work.

“I’m not sure he had the Hall all sewed up in his early 30s, but he says he believes he can play until he’s 40, which gives him four more years,” Stinson said. “That gives him a good shot at 500 homers, though 3,000 hits is probably out of reach. So he has a chance at passing (HOFer) Eddie Murray (504 HR), which would leave him second to only Mickey Mantle among all switch-hitters. That’s a pretty strong case.”

Bisher, who’s seen his share of great players during his half-century covering baseball, isn’t so sure Jones is a lock just yet.

“I’m not sure it’s a forgone conclusion,” Bisher said. “I think he’s in the middle-to-upper tier of all-time third basemen, but not quite the top of the grade. I would liken him to Ron Santo, one of the finest, but yet (one of the) most underrated, third basemen of all time. I voted for him to get into the Hall for many years and he’s still waiting, and he was a better defensive player than Chipper, so you just don’t know.”

Hobby Taking Notice
Although there has never been a huge number of his signed collectibles to select from, the scarce Jones autographed memorabilia that is available is about as hot as the man himself. Jones’ various rookie card offerings were mass-produced in the early 1990s and seemingly everyone has a stack of them, which keeps most prices in the $6-$10 range with little chance of soaring much higher. On the other hand, Jones has never been a big-time autograph guest and hasn’t had an exclusive signing deal with any company in several years, making his authentic signed items hot commodities and somewhat pricey.

“Card-wise, it’s hard to keep his autographed stuff in the shop. When we get some in house, they’re only here for a couple of days at the most,” said Rick Paul, owner of On Deck Sports Cards in Lawrenceville, Ga. “We get some autographed bats, balls and some jerseys from time to time, but they sell pretty quick, too. Chipper has been the face of the Braves for a long time now, and the kids really idolize him.”

Paul routinely sells autographed Jones bats in the $125 range, with signed baseballs changing hands in the $75-$100 range. Collectors can certainly expect a major spike in those numbers if Jones can become the 36th MLB player to ever hit .400 for a season.

While Jones’ rookie cards don’t carry much value, more recent autographed versions carry much more weight within hobby circles. His 2001 Upper Deck Sweet Spot Signature recently climbed to $90, his 2007 Bowman Heritage Signs of Greatness card moved up to $60, and his 1999 SP Signature Edition Autograph and 2000 SPX Signatures each rose to $50.

The Bottom Line
Considering a 2-for-5 day at the plate will actually lower his average from here on out, it will be very tough for Jones to sustain the sizzling pace he’s established in the first few months of 2008. An enriched lineup surrounding him should help increase his odds, but considering only one man has seriously threatened the elusive mark in the last 15 years – Tony Gwynn finished at .394 in 1994 – it seems doubtful that Jones will be sidling up to Teddy Ballgame anytime soon.

But even if Jones does fall short of .400 and finishes at, say, .370 and adds a batting title to his already impressive trophy case, Canton voters will likely stand up and take notice. If he does, and they don’t, it will be as embarrassing as being caught looking at a bases-loaded third strike when the pitch was what you’d refer to as, “straight down the middle.”