Celebrate the storied history of the New York Yankees.
From Jackson to Jeter, this magazine covers it all. Exclusive interviews with Yankee greats along with never-before-seen photos and memorabilia. Sign up to receive free eNews, tips and special offers from Sports Collectors Digest and download this magazine now.
Get it Free!
February 5, 2009 | admin | Comments: 0

Another strong lineup of first-rate sports memorabilia and cards offered by SCP Auctions generated more than $1.75 million for its 639 lots during the January Internet auction.

According to David Kohler, president and CEO of SCP Auctions, the sale attracted a wide range of collectors. 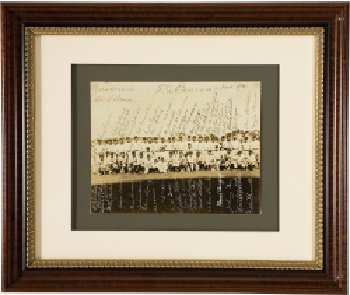 “Our collectors can’t be stopped,” Kohler said. “Their passion for high-quality sports cards and memorabilia will not be denied, even in tough economic times like these. I think it’s a wonderful testament to the dedication and passion of collectors who continue to pursue their passion. We’re very pleased with the results of the auction and the continued influx of new bidders in our sales.”

Highlighting the auction were several incredible, fresh new pieces of prewar memorabilia, including a team photo signed by all members of the legendary 1927 Yankees, graded PSA MINT 9, which yielded a high bid of $94,153. A Boston Red Sox jersey worn by Hall of Fame outfielder  Harry Hooper from 1916-18 netted $58,461.

A complete listing of prices realized from the January Internet auction is available online at www.scpauctions.com. SCP Auctions is currently accepting consignments for its next Internet auction event. For more information on how to participate, call (800) 350-2273.