Celebrate the storied history of the New York Yankees.
From Jackson to Jeter, this magazine covers it all. Exclusive interviews with Yankee greats along with never-before-seen photos and memorabilia. Sign up to receive free eNews, tips and special offers from Sports Collectors Digest and download this magazine now.
Get it Free!
April 21, 2009 | admin | Comments: 0

A rare, 1889 baseball card advertising poster, with an estimated auction value of more than $100,000, has been discovered at an estate sale in upstate New York, and will be auctioned in May by Lelands.com.  The poster advertises “The Goodwin Round Album,” a nine-page premium album of full-color round baseball card portraits of the leading players of the day.  It was available by mail order by sending in coupons packaged with Goodwin Tobacco. 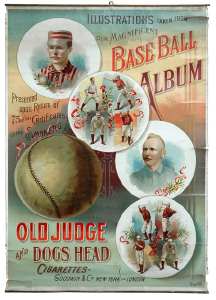 This poster is a one-of-a-kind piece, as the two others known are both a different format.  One of the two was also heavily restored.  The other was once in the collection of super collector Barry Halper.  It was one of only two pieces that hung in his office.

This poster is unrestored and in very good condition.  The poster features such future Hall of Fame players as Cap Anson, Mike “King” Kelly, Charles Comiskey, Mickey Welch, Tim Keefe, Roger Connor, John Ward, “Orator Jim” O’Rourke and Charles Comiskey.  The poster states “Presented Upon Return of 75 of our Certificates to the Smokers.” The design is a magnificent example of Victorian baseball advertising beginning to emerge as an art form in and of itself.

The poster was discovered by a family combing through an estate sale near Albany, N.Y., in March. Two other dealers had been through the estate but had either missed the poster or failed to recognize its value. This family recognized that a 19th century baseball item might have auction value, discovering it atop a dresser, and atop some books, rolled up.

The poster will be featured in the spring catalog auction to be held by Lelands, which will close in May. There is a $45,000 reserve on the item.

“It looked old, and it seemed out of place among all the items being sold that day,” said a spokesperson for the purchaser, whose name is not being identified.

“We always gets excited about finds like this,” said Josh Evans, founder and chairman of Lelands. “There are still great finds out there waiting to be discovered. The American antiques and collectibles field is still a great treasure hunt.”