Celebrate the storied history of the New York Yankees.
From Jackson to Jeter, this magazine covers it all. Exclusive interviews with Yankee greats along with never-before-seen photos and memorabilia. Sign up to receive free eNews, tips and special offers from Sports Collectors Digest and download this magazine now.
Get it Free!
September 29, 2008 | Ben Sobieck | Comments: 0

We should have known. When you can’t find something, it usually turns up right smack where you thought it should have been all along.
For more than 20 years, I wondered where all the original artwork went from the 1953 Topps set, or I should say more precisely, where most of the original artwork went from that classic all-painted issue. Sy Berger had them. Jeeez, how come we didn’t think of that?

Rob Lifson of Robert Edward Auctions is big-time enthused about his vaunted auction company being picked to handle items from Berger, the longtime Topps executive as inextricably linked to the vintage baseball card world as any man alive. The material will be part of Lifson’s 2009 auction, slated for late April of next year.

“I’d heard for years that he had the artwork,” Lifson said in a phone interview, so obviously I should have simply called him when I got to wondering where those paintings were. “What an honor to have that material, just to handle the stuff. The impact he has had is so immense. He might be the most important hobby person that ever lived.”

Berger isn’t a collector by inclination, but his proximity to Topps and the hobby for more than a half-century yields a bonanza unlike anything we’ve seen for quite some time. Atop that list are the 117 original paintings from the 1953 Topps Baseball set.

Old-time hobbyists will remember that a half-dozen killers from that issue sold in the 1989 Guernsey’s Topps Archives auction in New York City, a grouping of original paintings that included Mickey Mantle, Willie Mays, Roy Campanella, Bob Feller, Whitey Ford and Jackie Robinson. The Mantle and Mays paintings were sold for $121,000 and $88,000, respectively, purchased by the Marriott Hotel chain.

It’s really exciting to think what the remaining lineup might bring. Satchel Paige is the biggie, but there are others: Pee Wee Reese, Warren Spahn, Eddie Mathews, Enos Slaugher, Monte Irvin, Ted Kluszewski, Junior Gilliam and Dick Groat. This is going to be cool (they’ll be in Lifson’s April 2009 auction). There are even a couple of paintings of cards that were never issued (including Richie Ashburn), presumably because of the exclusive contract wrangling with rival Bowman that was a hallmark of the period from 1952-55.

Lifson says he knew of eight or nine originals that he had come across over the years, and Berger told him that he had given a number away in the 50-plus years that he was front and center of the Topps baseball card universe.

Many of the originals had initially been thrown out by Topps and later salvaged by Berger, who had a framed piece of about two dozen of the paintings in his offices at Topps. When Guernsey’s staffers were preparing that famed 1989 auction, they had gotten as far as pulling the framed piece off the wall before Berger nixed the idea.

The Paige, perhaps destined to be the most expensive of those offered in the spring 2009 sale, was among those included in the frame. It is the only regular-issue Topps card made of the Negro leagues legend, indeed, the only career-contemporary card of any Negro Leaguer elected to the Hall of Fame based on their play in that long-defunct arena. Lifson said a pre-auction estimate might range from $20,000 to $100,000 or more, which sounds reasonable to me given the importance of Paige and the spectacular hobby lure of 1953 Topps original artwork.

All of the paintings, roughly 3-1/4-by-4-1/2 inches – only slightly larger than the cards themselves – will be slabbed and authenticated by SGC, and will carry the designation “From the Sy Berger Collection” on the holder.

Lifson points out that Berger isn’t a collector in the conventional sense of the word, but his role with Topps brought him into so much contact with major league players that the items he accumulated would carry a one-of-a-kind quality not possible from anywhere else.

That would include a remarkable grouping of all of the file contracts from 1957-58 Topps Basketball, including the checks ($50) from Topps that were sent to the players to compensate them for use of their images. There are also salesmen samples of Bazooka Joe comics and even the contracts from the 1982 Kmart set, which was initially well-received by the hobby but was ultimately kind of cosmically overproduced. The roster of players included in that set is essentially all of the post-World War II MVP winners up to that date. 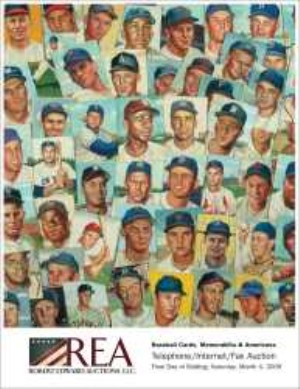