Celebrate the storied history of the New York Yankees.
From Jackson to Jeter, this magazine covers it all. Exclusive interviews with Yankee greats along with never-before-seen photos and memorabilia. Sign up to receive free eNews, tips and special offers from Sports Collectors Digest and download this magazine now.
Get it Free!
April 6, 2009 | Amanda | Comments: 1

I’m not one of those collectors who is into set building. I think it takes up too much time and money to accomplish. If they has everything in one single box, then I’d buy it. All of those doubles and other “advertising” cards for websites and special offers would drive me crazy.

And if collecting a full set of a particular card series would be too much for me, then trying to secure one of the Legacy Sets from Upper Deck might send me over the top of the crazy hill. It started with the Yankee Stadium set, which consisted of more than 6,600 cards. Thus far, two people have accomplished that feat (kudos – that couldn’t have been easy). 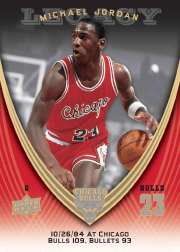 And then there was the Documentary series, which chronicled each MLB team’s 2008 season – that’s 162 cards for each team.

However, there is one Legacy Collection that I know collectors will eat up – and it will be a lot of collectors, not just one or two die-hards. Upper Deck announced that longtime company spokesman Michael Jordan is being honored with a 1,170-card tribute insert set chronicling every single Chicago Bulls game he played in from his NBA debut on October 26, 1984 through his game-clinching heroics in Game 6 of the NBA Finals on June 14, 1998.

The 1,170-card set will pack out inside four Upper Deck basketball products during the course of 2009: Lineage (April 1); Radiance (April 29); Upper Deck (Sept. 22); and First Edition (Sept. 29). Each of the cards includes MJ’s specific box score stats from the game in question, giving every card some historical significance as the overall set captures every game Jordan ever played with the Bulls, regular-season and playoff battles included. The cards will be at a ratio of 1:4 packs.

Plus, there will be another 100 gaem-used memorabilia cards in the set.

While this is still a LOT of cards, you must admit that when it comes to collecting, Jordan, like on the basketball court, is way above the others. To have a complete sets of these cards is not only a unique Jordan set, but it relives his career that would be hard to do otherwise.

With his announcement into the HOF today, this will just add to the momentum that is Jordan, even if we were all just waiting got this day anyway.

One thought on “Jordan Legacy Set Will Find Plenty of Takers”