Celebrate the storied history of the New York Yankees.
From Jackson to Jeter, this magazine covers it all. Exclusive interviews with Yankee greats along with never-before-seen photos and memorabilia. Sign up to receive free eNews, tips and special offers from Sports Collectors Digest and download this magazine now.
Get it Free!
September 25, 2008 | Amanda | Comments: 0 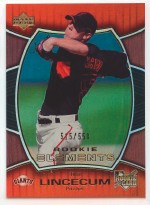 Heard a lot of NL Cy Young talk as of late and I’m not sure what some people are thinking as far as their choices. Don’t get me wrong, I believe this is one of the tightest years in recent memory, but I also believe when you analyze the numbers of each candidate you’ll find a clear-cut winner.

We can probably all agree that the three pitchers in the race are Johan Santana, Tim Lincecum and Brandon Webb. That part is fairly easy with CC Sabathia and Ryan Dempster also receiving some votes.

Those making a case for Santana immediately point to the Mets ineffective bullpen as the reason for him posting 15 wins (15-7) instead of 20-plus and I wholeheartedly agree that New York’s inability to close out games this year cost him several victories. While his league-best 2.64 ERA and 197 strikeouts are impressive, he did have the sixth-best run-producing offense on his side which somewhat cancels out the bullpen issues theory. Consider the Mets scored 787 runs this year while the Diamondbacks scored 734 (20th) and the inemic Giants offense managed just 629 (29th) runs or less than four on average per contest.

Webb was easily the best pitcher in all of baseball throughout the first three months of the season but his second half was nothing to get too excited about as my Fantasy team can attest to. His 22-7 mark is tied with Cleveland’s Cliff Lee for Major League honors and his 3.24 ERA is ninth best in the NL but back-to-back subpar outings in late August coupled with his overall dip in the second half ended his hope of winning the award for the second straight season.

Not exactly sure what criteria will be used for each person voting for the award on Sunday but you’ll notice there’s no mention of team records listed in mine (at least not until later). The reason for that is simple, no pitcher, not even Young himself, could turn the 2008 Giants into contenders, not even Lincecum, although he did all he could every fifth day.

The hard-throwing 24-year-old gets my fictional vote because of the fact he almost single-handedly kept what amounts to a glorified Double-A squad from losing the 100 games like many predicted they would. His 15-7 record is all the more impressive when considering the little run support he got and his 2.66 ERA was just slightly higher than Santana’s. Factor in Lincecum led all of MLB with a whopping 252 Ks (best in Giants history) which was 46 more than second-place finisher Cincy rookie Edison Volquez, he also added eight double-digit strikeout performances and an impressive 1.18 WHIP to boot. Also consider that Lincecum allowed three or fewer earned runs in 24 of his 33 starts thus far, including 14 straight to open the season, never missed a start and logged 220 innings overall, and it’s really an open and shut case that Lincecum was the NL’s best pitcher this year.

And if you still can’t wrap your arms around my choice, just remember he played for the Giants, the 70-88 San Francisco Giants.

Disagree with my pick, let me know where I went wrong. You’ve got until Sunday to change my mind, then I have to turn in my imaginary ballot.