Celebrate the storied history of the New York Yankees.
From Jackson to Jeter, this magazine covers it all. Exclusive interviews with Yankee greats along with never-before-seen photos and memorabilia. Sign up to receive free eNews, tips and special offers from Sports Collectors Digest and download this magazine now.
Get it Free!
September 11, 2008 | Amanda | Comments: 0

I was just reading about Upper Deck recently sweetening the pot for those trying to put together the ginormous Yankee Stadium Legacy series, a 6,661-card insert set that details ever home game played at the historic ballpark in the Bronx dating back to 1923. My first reaction, good call, sweetening was needed for this daunting task. 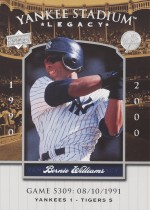 The new proposition offered by UD will give the first five collectors to complete the set, (did I mention it was 6,661 cards?) a “Yankee Dream Day” at the new stadium along with a meet-and-greet with Yankee shortstop and UD spokesman Derek Jeter. With a set this big, not to mention the money it would take to complete it, in my opinion, winners should instantly earn a starting spot in the Yankees lineup, which would make the reward equal to the challenge. Although with the way the Yankees have folded down the stretch that might be more of a punishment than a reward, at least collectors would receive a prize worthy of their efforts.

Tackling a set like this is a huge undertaking for anybody and I’m guessing a lack of collector interest prompted the updated prize package or maybe it was just a case of the people at UD realizing they were asking a lot of their customers in the first place. Either way, good call on the late additions, I can’t imagine this promotional effort was going to get too far off the ground without them.