Celebrate the storied history of the New York Yankees.
From Jackson to Jeter, this magazine covers it all. Exclusive interviews with Yankee greats along with never-before-seen photos and memorabilia. Sign up to receive free eNews, tips and special offers from Sports Collectors Digest and download this magazine now.
Get it Free!
May 12, 2010 | Amanda | Comments: 1

When you’re an active living legend in the sports world, you’re afforded
some special perks. For some, it could be a coach sending a private
plane to get you and then personally picking you up at the airport. For
others, it might be a phantom injury invented by your coach that affords
you a few extra games off down the stretch. Or it might be as simple as

assigning your superstar an extra locker or two, you’ve got to keep your
superstar happy.

I’ve never been a big fan of any special treatment that separates
athletes into different class levels based on their star power. Do you
remember how Roger Clemens was allowed to stay in Houston when the
Astros left for a road trip and how much grief Barry Bonds took for
having his own Lazy Boy in the clubhouse? It’s similar to the way that
football players get voted to Pro Bowl based on their past
accomplishments or t 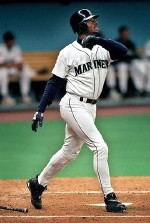 he way an established star gets all the close foul
calls on the court. Many accept the favoritism as a part of the sports
world and believe the stars have earned the special treatment, but I beg
to differ.

Team sports consist of a designated number of players coming together in
pursuit of a common goal and when all parts of the team are each
pulling their
own weight in the same direction and maximizing their own effort, the
team often becomes close to
unbeatable. When a team is divided into different tiers and the best
players are held to a different standard, whether it be higher or lower
than the lesser players, it is often accompanied by a dividing factor
and any hopes of unity and chemistry go up in smoke.

Such appears to be the case in Seattle, where the Mariners came into the
2010 with several high-priced free agents in toe and lofty
expectations. After signing Cliff Lee to solidify their pitching staff
and inking Chone Figgins and Jack Wilson to big-money deals to sure up
the defense, Seattle was one of the trendy picks to contend for the
pennant. Fast forward to 30-plus games into the season and the Mariners
are 13-19, 2-8 in their last 10 games and are the lowest-scoring team in
the American League. As often is the case when a team is struggling on
the field, problems begin to surface off of it. In this case,
specifically in the clubhouse, where aging superstar Ken Griffey Jr. was
reported to be napping during the middle of Seattle’s game on Saturday
night.

According to two different unnamed teammates, Griffey Jr. left the bench
area during the fifth inning, slipped into the clubhouse and never
returned to the Mariners’ bench. One of the players later went to see
where Griffey had gone and found him asleep in the clubhouse.

“He was asleep in the clubhouse,” one player told The Tacoma (Wash.)
News Tribune on Monday.
“He’d gone back about the fifth inning to get a jacket and didn’t come
back. I went back in about the seventh inning and he was in his
chair, sound asleep.”

After the story made national news, manager Don Wakamatsu danced around
the issue before denying the incident ever happened while veteran
teammate Mike Sweeney called a team-only meeting to address the
situation where he challenged the unidentified players to step forward.
Sweeney went so far as to challenge the unnamed players to a fight for
breaking an unwritten rule of keeping what happens in behind closed
doors, well, behind closed doors.

So let me see if I got this straight, Griffey abandons his teammate
during a close game and decides that catching up on some sleep is more
important than making himself available to pinch hit. With his .200 batting average and zero home runs,
Mariner fans might have been better served with Griffey catching some Zs
anyway, but is that really how you want one of your team leaders to set

When asked whether he was asleep in the clubhouse, Griffey was vague. He
didn’t answer the specific question but said, “I wish they (the unnamed
players) had been man enough to talk to me.”

The latest
Bizarro-world twist on this story came Tuesday night when (Cliff) Lee
stopped the post-game news conference and said he wouldn’t speak until
the writer of the Griffey Sleeping In Seattle story left the room. The
rest of the team followed suit and refused to speak with Mariners
long-time beat writer Larry LaRue altogether. Sweeney said the team
would stay unified after nobody stepped up to meet his challenge and
admit they leaked info about letting a sleeping dog sleep.

So
because one young Mariners player didn’t admit to telling the truth
about what he saw in the clubhouse in front of an angry mob and suddenly it never happened?

So, the writer and the guys that leaked the story are the bad guys here
and not the
aging superstar that punched out early and left his teammates to fend
for himself? Gotta side with the scribe on this one.

When players are afforded the star treatment and the inmates starting
running the asylum, bedlam ensues. Rules are rules and they should be
followed by each and every member of a team whether you’re an unproven
rookie or a future HOFer with 630 home runs on your resume. Griffey has earned the right to some special perks form time to time but sleeping on the job is not one of them.

You
had a great run Griff, maybe it’s time to call it a career and get some
shut eye, you deserve it. Just save it for when you’re not on the
company clock would ya?

One thought on “Time For Griffey Jr. To Put His Career To Bed”