Celebrate the storied history of the New York Yankees.
From Jackson to Jeter, this magazine covers it all. Exclusive interviews with Yankee greats along with never-before-seen photos and memorabilia. Sign up to receive free eNews, tips and special offers from Sports Collectors Digest and download this magazine now.
Get it Free!
November 22, 2010 | Amanda | Comments: 1

Every football fan or sports fan for that matter, has
heard it all before. You know the drill, the game ends and the
microphones appear. Suddenly the high-priced stars are forced to try to
sum up what happened on the field and offer their own take of the
preceding three hours of play and we’re are usually quickly reminded why
these guy’s talents are never confused with Stephen Hawking’s. 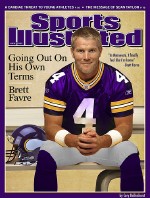 translator. You know the
ole … “It was a total team effort today, I couldn’t of done it
without my teammates.” Or the ever-popular … “We’re going to enjoy
this one now and get right back to work tomorrow.” “Blah, blah, blah,
win as a team and lose as a team.” “Blah, blah blah, useless
information, player-speak, cliché, yadda, yadda yadda.”

We see the player’s mouths moving and we hear words coming out but yet
when the sound bite is over it’s as if they’re all speaking Yiddish.
While it’s about as rare as an interception-free game from Brett Favre,
every once in a while, a player or coach will say something valuable.
Something we can understand although you might have to read between the
lines to fully grasp the meaning.

After an exciting Week 12 in the NFL, several players and coaches broke
the tradition and gave the public something to chew on with their
post-game chatter. You might have to read their respective quotes a time
or two to truly comprehend what they meant and just in case you’re
still a little cloudy, I’ve provided a translation that should clear
things up.

After his Jacksonville Jaguars pulled out a 24-20 victory over the Cleveland Browns, Jags quarterback David Garrard said:

“You’re going to have those moments,” said Garrard, who threw for 254
yards and two touchdowns to somewhat offset three interceptions and a
fumble. “The best thing about it was we kept persevering.”

Translation: “Much like last week when we got lucky on a nearly
perfectly defensed Hail Mary pass on the final play, we got lucky yet
again. Maurice Jones-Drew had an outstanding game and single-handedly
won this game for us. Thank god for him because in spite of the fact
that I did my best to blow it, most people will now forget how I have no
business being a starter in the NFL because somehow because we won and
we’re tied for the division lead.”

After his team gave up 31 unanswered points and his season and his
career all but came to an end after a 31-3 loss to the rival Packers,
Vikings quarterback Brett Favre was asked about his future now that
Minnesota fell to 3-7 and effectively ended any hopes of a postseason
run.

“I’m here, and we’re in this thing together”

Translation: BS, BS, BS. I’ll be here for six more games
because that means six more million dollars in my pocket. I’ll be here
and I’ll keep my Consecutive Games streak intact because this season has
been one embarrassment after another and my enormous ego can’t handle
many more hits. So I’ll be here saying the right things, collecting
checks and trying to do some more damage control with Deanna at home
because it looks all the Hush money I paid to make this Sterger mess go
away was a bigger waste of money than the $500 I paid for that camera
phone. Plus, I finally talked Ziggy into firing Chilly, I’ll be in early
every day from here on out”

Wide receiver Terrell Owens commenting after his Bengals blew a 35-14
lead, allowing 35 unanswered points to the Buffalo Bills and falling to
2-8 in the process.

“We are terrible,” receiver Owen said, taking off his sunglasses for emphasis. “And I don’t blame the
fans for booing us. I don’t blame people for not wanting to come and see
the performance we’ve put up the last (seven) ballgames.”

Translation: “The Bengals are terrible.” This a very rare
occasion when what an athlete is saying is the truth. Congrats to T.O.
for the honesty. He’s finally all growns up, he’s all growns up.

Tennessee head coach Jeff Fischer when asked if high-tempered former
starting quarterback Vince Young will still be the starter after he
threw his shoulder pads and jersey and stormed out of the team’s
post-game meeting after being pulled from the Titans 16-13 overtime loss
to the Redskins.

“He threw half his uniform in the stands. I think clearly that is no way
to respond, and so we have some things that we have to sort out with
him,” Fisher said of Young. “He may need surgery. And if that’s the
case, he’s done for the year.”

Translation: “He’s dead to me. He’s an overrated, self-absorbed
spoiled kid with no heart. He walked out on me, his teammates and this
organization and I would rather lose with an untested sixth-round
Practice Squad QB named Rusty than have him try to lead this team again.
I hope his injury is worse than he thinks it is because it will save
him the embarrassment of explaining why he isn’t playing in the next six
games.”

Houston Texans owner Bob McNair asked about the team’s future after the
Texans slipped to 4-6 after blowing a fourth-quarter lead when Jets
quarterback Mark Sanchez connected on a six-yard touchdown to Santonio
Holmes with :55 seconds left.

“It was a great comeback, then we let it slip away,” Texans owner Bob
McNair said. “When it’s going tough, you’ve got to step up. They stepped
up. We didn’t. They are all painful.”

Translation: “Heads will roll after this one. Coach Kubiak is
done. He’s been given the benefit of the doubt far too many times
already. We’ve got a top-tier QB, one of the best backs and the best
receiver in the game and we’re 4-6 and looking at another season of
missing the playoffs. Tell our D-Coordinator I want to see him in my
office immediately and he should bring his playbook.”

One thought on “Reading Bewteen The Lines of NFL Speak”