Celebrate the storied history of the New York Yankees.
From Jackson to Jeter, this magazine covers it all. Exclusive interviews with Yankee greats along with never-before-seen photos and memorabilia. Sign up to receive free eNews, tips and special offers from Sports Collectors Digest and download this magazine now.
Get it Free!
October 5, 2009 | Amanda | Comments: 0

It’s hard to believe it’s only been 48 days since Brett Favre shocked
the world and signed with the Minnesota Vikings. The amazing amount of
media attention that followed lies somewhere between the O.J. trial and
9/11. Obviously, Favre donning the uniform of the Packers’ arch rival
for a game against his former teammates pales in comparison to murder
and terrorism, but you wouldn’t know it based on the amount of hype
spinning out of control in the Wisconsin-Minnesota (and nationwide to a
lesser degree) area as of late.

In the midst of all the “coverage” and “analysis” leading up to
tonight’s Minnesota-Green Bay game at the Metrodome, several
interesting (actually, several might be pushing it) perspectives have
come to my attention that I wasn’t previously aware of. 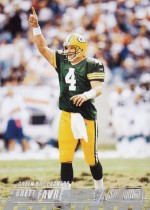 While listening to (far too much) sports talk radio and reading
comments from long-time Packers fans, I have learned that while it
couldn’t be farther from the truth, a large percentage of
green-and-gold fans (and I’m assuming non-Packer fans as well) still
believe that Packers GM Ted Thompson forced Favre out of Green Bay.
Really people? Really?

For those who didn’t follow the saga closely for the last four-plus
years, let me try and clear it up as simply as I can without all the
messy timelines and he-said, he-said accusations that have muddled up
the picture.

The Favre retirement talk began in earnest after the 2005 season when
the Packers fired Mike Sherman and hired Mike McCarthy. The hire
signaled the start of what appeared to be a rebuilding project in Green
Bay, as the new coach along with GM Ted Thompson looked to get younger
via the draft. An aging Favre contemplated retirement at the time, not
because he didn’t feel he could still compete, but because at age 35,
he wondered if the team could supply him with the tools necessary to
make another title run. Favre realized that because of his age and the
general wear and tear accumulated after 12-plus seasons in the NFL, he
could no longer carry a team on his back and make an average supporting
cast Super Bowl ready.

At that point, with Favre hinting more and more seriously about
retirement, the Packers began to groom 2005 first-round pick, Aaron
Rodgers, as the aire apparent to Favre while trying to build for their
future. The team threw Favre a couple bones by selecting receivers Greg
Jennings and James Jones in the 2006 draft and running backs Brandon
Jackson and DeShawn Wynn the following year. The retirement talk would
subside after each draft only to have it resurface every January, with
Favre seemingly inching closer to calling it a career each offseason
from 2005 until 2008 when he left for good.

While the whole point of this blog is to set the record straight and
disprove the theory that Thompson is at fault for Favre’s departure, by
no means was Thompson without blame. After finishing the 2006 campaign
8-8 and missing the playoffs, Favre first became irked with management
after the team failed to acquire Randy Moss from Oakland. The Patriots
landed the talented receiver for a 4th-round pick in the draft and
Favre felt Thompson and company should’ve made a bigger push to get him
the true weapon he’d been lacking.

Thompson’s young receivers (Jennings and Jones) stepped up big in 2007
(14 TDs and nearly 1,000 yards) and all was forgotten, as Favre posted
one of the best seasons of his career and the young Packers finished a
surprising 13-3 and came within one Favre interception of taking on the
unbeaten Patriots in the Super Bowl. Two months (March) later after
leaving the Packers in limbo about his status for the 2008 season,
Favre officially announced his retirement, citing he was “mentally
drained” and could no longer play at the level he was accustomed to.

Because he had waffled with this decision several times previously, the
Packers management asked Favre if he had changed his mind prior to the
draft in April and Favre reiterated that he was in fact staying
retired. So the team looked to build for the future via the draft and
selected two quarterbacks in the in the 2008 draft assuming Favre would
stay true to his word.

In July of 2008, Favre apparently got the itch to come out of
retirement and play again. He intentionally leaked the story to ESPN’s
Chris Mortenson to gauge the Packers’ interest of a possible return. It
was at this time where matters became a little murky and the facts
became a little cloudy. In the time between March and July, Green Bay
handed over the
reigns to Aaron Rodgers and prepared for Rodgers to be their starter.
When the Packers informed Favre that because of what he had previously
told them in March, they had moved on. Because he had now put them in a
terrible position (both from a PR standpoint and a team unity
perspective) with his constant indecision, the Packers half-heartedly
told Favre to come into camp and compete with Rodgers for the starting
quarterback job. At that point, Favre’s feelings and ego were bruised
to such a degree by this perceived lack of support that he vowed to
never return to the Packers and set forth an agenda that would
ultimately lead us to where we are today.

For all the Thompson haters out there, riddle me this: If you’ve gone
out of your way to accommodate a player to the degree that the team did
with Favre for so many years and then he tells that he is 100 percent
certain he’s walking away from the game, how can you not start to move
on and plan for a future without him? The Green Bay Packers are a team
of 80 players and no successful team can let the fate of 79 others be
held hostage by the indecisions of one lone player no matter how great
he might be. Thompson and the Packers pampered (perhaps even coddled
and enabled) Favre like many other teams have pampered aging legends in
the past and afforded him the opportunity to regain his starting status
and allow them to save face at the same time but his ego got in the way
and the soap opera began.

After examining all of the facts and listening to both sides of the
story, it’s clear what happened. Favre ultimately wasn’t welcomed back
the way he felt a legend should be and his ego wouldn’t allow him to
understand the Packers had no other alternative than to handle things
the way they did. Say for argument’s sake that Thompson and the
Packers rolled out the welcome wagon once again when Favre changed his
mind. They tell Rodgers ‘sorry, but we have to accommodate this guy
because of all he’s done for this franchise.’ Favre comes back, plays
well, but hangs up the cleats for good at season’s end and they turn to
the oft-jilted Rodgers to take over as team leader and quarterback of
the now and of the future. My guess is Rodgers and many of his
teammates already in his corner lose all faith in management and team
chemistry, unity and cohesiveness go out the window.

When Favre told the Packers in July of 2008 that he was unequivocally
retired, all bets were off and the team switched gears and began its
journey in a new direction. Feeling disrespected and underappreciated,
Favre set in motion a plan to ultimately make the team, and Thompson
in  particular, pay for their decision.

So here we are, just hours away from the first showdown between Favre’s
old team and his new one. I, like many others, wished it all could’ve
been avoided but it is what it is and hopefully all of the Favre haters
and all of the Thompson haters can put the drama behind us and root for
a game that lives up to the incredible hype. Maybe that will be easier
now that they better understand the facts behind the drama. I for one
don’t like how things played out but I do understand each side’s
actions and reactions and that makes it more tolerable as of fan of
both Brett Favre and the Green Bay Packers. Hopefully it will have the
same effect on some of the haters as well.