Celebrate the storied history of the New York Yankees.
From Jackson to Jeter, this magazine covers it all. Exclusive interviews with Yankee greats along with never-before-seen photos and memorabilia. Sign up to receive free eNews, tips and special offers from Sports Collectors Digest and download this magazine now.
Get it Free!
November 18, 2008 | Amanda | Comments: 1

By now, I’m sure everybody has heard about Philadelphia Eagles 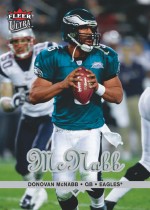 quarterback Donovan McNabb’s latest foot-in-the-mouth moment. It came shortly after McNabb’s Eagles came up empty in overtime and his team had to settle for the NFL’s first tie since 2002. Once the overtime session ended and neither team had managed to score, McNabb was under the impression that the two teams would continue playing until somebody scored.

“I’ve never been a part of a tie. I never even knew that was in the
rule book,” McNabb said after the game. “It’s part of the rules, and we
have to go with it. I was looking forward to getting the opportunity to
get out there and try to drive to win the game. But unfortunately, with
the rules, we settled with a tie.”

“I guess we’re aware of it now,” McNabb said. “In college, there are
multiple overtimes, and in high school and Pop Warner. I never knew in
the professional ranks it would end that way. I hate to see what would
happen in the Super Bowl and in the playoffs.”

The fact that the overtime rule was established in 1974 and McNabb and the Eagles have been a part of 12 overtime games since he joined the team in 1999 makes him just that much more of an idiot. Eagles coach Andy Reid tried to take some of the responsibility for McNabb’s ignorance and he probably should. Andy, instead of wasting time bailing out your players’ ignorance of the rules, your time might be better served teaching them the rules so the next time your Eagles find themselves in overtime, they might play with a little more sense of urgency.

Having a team leader who doesn’t know what the hell is going on and possibly not giving his all on every single play of the extra session is inexcusable and cause to look for a new team leader in my book.

One thought on “Not So Deep Thoughts”