Celebrate the storied history of the New York Yankees.
From Jackson to Jeter, this magazine covers it all. Exclusive interviews with Yankee greats along with never-before-seen photos and memorabilia. Sign up to receive free eNews, tips and special offers from Sports Collectors Digest and download this magazine now.
Get it Free!
October 15, 2008 | Amanda | Comments: 0

Just thought I’d chime in on a few topics that caught my eye the last few days and see if I’m the only one thinking Cowboys’ owner Jerry Jones panicked in making the trade for WR Roy Williams? 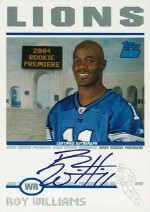 Williams is a former Pro Bowl caliber player and could easily regain that form now that he has a legitimate quarterback throwing to him, but the first post-Matt Millen move made by Detroit has all the makings of a highway robbery. Jones said he has been coveting Williams for the last two years and couldn’t get a deal done during the Millen era. Knowing how smitten Jones was with Williams and realizing injuries to Tony Romo, Felix Jones and Sam Herd had decimated the Cowboys offensive capabilities, the Lions simply held out for more and Jones eventually caved. Watching billionaires like Jones get outsmarted like that makes you wonder how they built their financial empires in the first place doesn’t it?

Speaking of bad Jones’ decisions, it looks like the Pacman experiment was more trouble than it was worth. Seems the trouble-prone defensive back got all liquored up and started a fight with the guy the Cowboys assigned to keep him out of trouble. What? Pacman’s issues would probably be more tolerable if he was an elite defender or even an above-average return specialist like many said he was but that has not been the case and now the Cowboys are forced to admit their mistake in giving him a second chance and move on.

When it comes to quarterbacks, one of the intangibles scouts and GMs look for is field awareness. In general terms, this basically means that a guy is always in the game as far as knowing the down and distance, understanding the score, his team’s position on the field and most importantly what he can and cannot do with the game on the line. Apparently Lions’ backup QB Dan Orlovsky was home sick on the days the team went over such things in Training Camp because his safety in last week’s loss to the Vikings was both comical and inexcusable at the same time. Tied 0-0 in the first quarter against the Vikings, Orvlosky took the snap at his own two yard line and dropped back to pass in his own endzone. Minnesota’s Jared Allen forced him from the pocket and Orvlosky retreated back a couple yards while scrambling from the pressure and was called for the safety as he appoached the first row of seats behind the endzone. Talk about lack of awareness. This guy was out of the endzone for about as long as the cheerleaders were coming back after the commercial before he realized what was up. Clueless, totally clueless.

And last but not least, how about a shout out to the impressive Rays of Tampa Bay. Not only are they taking care of the defending champs, they’re doing it with an offensive barrage like no other. I believe the Sox are rolling out Josh Beckett in an attempt to prolong the inevitable but it might take Josh Gibson to slow down these sizzling bats.