Celebrate the storied history of the New York Yankees.
From Jackson to Jeter, this magazine covers it all. Exclusive interviews with Yankee greats along with never-before-seen photos and memorabilia. Sign up to receive free eNews, tips and special offers from Sports Collectors Digest and download this magazine now.
Get it Free!
December 7, 2010 | Amanda | Comments: 0

With the seemingly never-ending saga of Redskins ultra-slacker defensive
tackle Albert Haynesworth taking on a new twist Tuesday, I decided to
revisit all of the facts in this bizarre soap opera before I offered an
opinion.

Now, I’ve never met Washington coach Mike Shanahan before, but from the
news conferences and interviews I’ve seen with him, he always came
across as a little douchey. You know, the kind of guy that compliments
you in front of others and then belittles you after you leave to go to the rest
room. 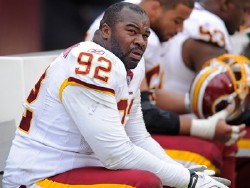 Doesn’t seem like a trustworthy guy to me (ask Donovan McNabb). I always thought his
two Super Bowl wins with the Broncos were won in spite of him, not
because of him.

So when Haynesworth and Shanahan started butting heads this summer
during mini-camp, I assumed that it was a new, old-school coach marking
his territory simply trying to make a statement. That statement was:
“This is my team and just because we have an impulse-shopper owner who
overpaid you by about $90 million, I’m the captain of this ship now and
you will fall in with the others or face my wrath.” A seismic pissing
match ensued with Haynesworth now being suspended without pay for the
team’s final four games for what Shanahan and the Redskins are calling
“conduct detrimental to the team.”

According to the veteran coach, Haynesworth “repeatedly refused to
cooperate with our coaching staff in a variety of ways over an extended
period of time.” The final straw came this past week when Haynesworth
showed up late for practice on Friday and claimed he had an illness and
couldn’t take part in the team’s scheduled workout. One website has
reported that Haynesworth was not sick but rather simply hungover from a
late night on the town the night before. Haynesworth admitted he was out tipping back a few but said he went home early after not feeling well.

Shanahan added that Haynesworth continually refused to play in certain
defensive packages and often refused instruction from defensive coaches
during practices and games. Who does this? To top it off, Haynesworth
told Redskins manager Bruce Allen that he would no longer speak with
Shanahan which prompted Shanahan to make him inactive for last Sunday’s
game against the Giants and ultimately pulling the plug on his season four
games early. His bio says he’s 29 but his actions scream 11.

This latest episode comes months after Haynesworth skipped optional
offseason team workouts, boycotted a mandatory mini-camp session, failed
a common conditioning test (ESPN host Mike Golic, 18 years his senior,
passed the test on his first try) several times after arriving late to
camp and has resisted his role in the Redskins new 3-4 defensive scheme,
insisting he’d dominate like no other if the team switched back to a
4-3.

In a interview Monday, Haynesworth blamed the report on
“haters” who don’t like him, said he was too upset to meet with Shanahan
Tuesday, and again proclaimed he could be the greatest ever if he could
play the way he wants to play.

“Yeah, I went out on Thursday but
left early because I wasn’t feeling good and went home,” Haynesworth
said. “And then they want to sit here and say I was hung over and drunk
and something like that? … For these people to make up lies to try to
make me look bad, it’s ridiculous.”

What’s ridiculous Albert, is having to convince a guy who signed a
7-year, $100 million contract last year to do his job. What’s ridiculous
Albert is having to constantly cater to your special needs and requests
after you signed the third largest contract in NFL history. It’s also
ridiculous to have to coddle to a guy making $10 million a year who
takes more plays off than Randy Moss ever has. If Haynesworth was still
producing at that same level that made him a two-time Pro Bowler in
Tennessee, maybe the Skins would look the other way on some of his
“quirks.” But in the eight games he’s played in this year, he’s produced
just 16 tackles and two and half sacks. That’s about $625k per tackle
or in layman’s terms, way too much for that little bit production.

I’m no pro athlete, in fact I’m in the bottom tier of my over-40
pick-up basketball games I play at the gym. But if I was given the
ability to play professional football at an elite level, I’m fairly sure
I would bust my hump for as long for as I could knowing my dream
“career” could end at any moment and that I’ve been blessed to play a
game for a living. Add in the fact that someone was willing to ensure
that I will never work another day in my life when I retire and afforded
me the opportunity to buy anything I see fit and I can assure you I
would be giving you my best each and every time I put the uniform on.
Apparently those “perks” of the job were lost on Haynesworth. Somewhere
along the way he put the horse in front of the carriage and decided that
his life walking down Easy Street began the day he signed his
$100-million deal and not the day the contract expires.

So upon further review, I would like to apologize to Mr. Shanahan.
While I do still believe he’s a little shady, this battle of wills that
started as a power trip, ended with the only possibly solution and
Shanahan ultimately regaining the respect of his team and one mistaken writer.