Celebrate the storied history of the New York Yankees.
From Jackson to Jeter, this magazine covers it all. Exclusive interviews with Yankee greats along with never-before-seen photos and memorabilia. Sign up to receive free eNews, tips and special offers from Sports Collectors Digest and download this magazine now.
Get it Free!
January 7, 2011 | Amanda | Comments: 0

Oh what a week in the NFL. With the huge “playoff-like showdown” between Seattle and St. Louis now in the books and the postseason roster all set, the week leading up to the playoffs shifted focus to the revolving door coaching changes that always accompany the final game.

For those who missed it, the short version is as follows: Eric M 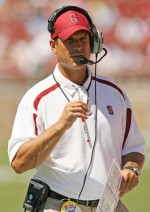 angini is out in Cleveland because he and Mike Holmgren couldn’t co-exist and the Browns took a step back this year, Tom Cable is out in Oakland after allegedly choosing to implementing his own game plans each week (the nerve) instead of using the play calls passed down from owner Al Davis and Carolina’s John Fox was shown the door because, well, did you see the Panthers this year?

From there, focus shifted to the possible replacements in those cities as well as with the Broncos and 49ers, who beat the rush and booted Josh McDaniel and Mike Singletary weeks ago. Other coaches like Marvin Lewis in Cincinnati not only escaped the axe, but was even rewarded for the Bengals impressive 4-12 record this year be getting a contract extension. That’s a smart business move in Bizzaro World and no where else.

As we delve back into the absurdity that is the coaching carousel, the coach de jour is, and continues to be, Stanford coach Jim Harbaugh. Despite not having ever been a head coach at the NFL level and just two years of experience as an NFL assistant, several NFL squads have reportedly been waving $7-8 million in his face with hopes of enticing him to lead their respective teams. To put that in better perspective, consider that Bill Belichick, almost unanimously considered the best coach in the business, currently gets $7.5 per year to coach the Pats. So if you’re an NFL owner how can you even consider giving an unproven coach like Jim Harbaugh similar cash?

While Harbaugh might be a great “Rah-Rah” motivator who can get more out of a 19-year-old athlete than some others, and the pro-style offense he employs might help lure those same kids away from Oregon and into Cardinal Nation, it doesn’t necessarily translate into success at the NFL level. Don’t believe me? Just ask Steve Spurrier, Butch Davis, Nick Saban, Mike Riley, Pete Carroll or Rich Brooks.

It appears that Harbaugh has shunned the advances of Michigan, Miami and Denver and his future will likely lead him to San Francisco or back to Palo Alto. My guess is he’ll join QB Andrew Luck and stay at Stanford and explore greener pastures after next season. Maybe by then NFL GMs and owners will come to their senses and figure out that NCAA Golden Boy coaches who enjoy success are almost always failures when they try their hand at the NFL game.