Celebrate the storied history of the New York Yankees.
From Jackson to Jeter, this magazine covers it all. Exclusive interviews with Yankee greats along with never-before-seen photos and memorabilia. Sign up to receive free eNews, tips and special offers from Sports Collectors Digest and download this magazine now.
Get it Free!
December 22, 2010 | Amanda | Comments: 1

It had been 56 long years since the San Francisco Giants had tasted
World Series success and the long drought just made it that much sweeter
for their fans when it finally arrived.

Ever since the Giants finished off the Texas Rangers back in November,
the team’s long-suffering fan base has opened its arms to embrace
everybody and everything relating to the Giants. As is often the case
under similar circumstances, the team’s role players became stars and
its stars morphed into superstars. Fans simply can’t get enough of their
beloved Giants and to prove it, you have to look no further than the
many Bay-area card shops, 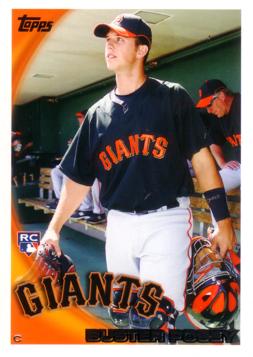 where business has been booming ever since San
Francisco claimed the 105th World Series.

Much like the Giants themselves, the baseball card market has been
stagnant in recent years but bringing a World Series title to the Bay
has rejuvenated the appeal of the team and the cardboard featuring its
players. Several Bay-area card shop owners have reported a huge uptick
in sales in recent weeks with players like Rookie of the year Buster
Posey leading the way.

Posey has been a hot commodity for collectors ever since the Giants made
the talented catcher the 5th overall pick of the 2008 MLB Draft, but
since exploding onto the scene midway through the season and almost
single-handedly carrying the team into the postseason, his hobby stock
has risen faster than the price of gold. Posey’s Rookie Card could be
had for about $3 during his first season but has soared into the $15-$17
range since his second-half heroics.

Other Giants taking top billing with collectors are pitchers Madison
Bumgarner, Matt Cain and closer Brian Wilson along with veteran Edgar
Renteria. The aging shortstop captured World Series MVP honors and
captured the hearts of the Giant faithful in the process. Renteria’s
clutch three-run homer that helped win a Series-clinching Game 5 forced
veteran collectors to dust off their old Renteria cards and begin the
search for current ones. His once forgettable pasteboards are now among
some of the most highly sought after in the hobby, proving just how
fickle collectors can be.

So while the hobby has seen its share of better days, years and even
decades, it’s been, and will continue to be, resurgent. Whether its
collectibles featuring your favorite teams or more specifically your
favorite players, their popularity is only a championship away.

One thought on “Card Popularity Just A Title Away”