Celebrate the storied history of the New York Yankees.
From Jackson to Jeter, this magazine covers it all. Exclusive interviews with Yankee greats along with never-before-seen photos and memorabilia. Sign up to receive free eNews, tips and special offers from Sports Collectors Digest and download this magazine now.
Get it Free!
June 24, 2010 | Amanda | Comments: 6

Let me preface the following by saying we here at Tuff Stuff’s Sports
Collectors Monthly don’t grade cards. Our sister publication, Sports
Collectors Digest used to grade cards back in the early 2000s,
but after a four-year run our company decided that because the business
gave the appearance of a conflict of interest, it was not in our best
interest to continue to try and be a contender in the already crowded
marketplace. 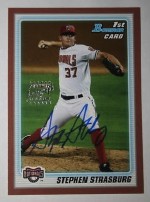 companies such a PSA,
SGC and Beckett. The complaints came pouring in at the time, with
many believing the grades we were awarding we’re higher than than
deserved to be and that SCD grading was simply looking to gain
some attention, create a buzz within the hobby and sway customers in our
direction. I wasn’t with the company at that time, but my guess is
there was some truth to those claims. Companies have, and will continue
to always look to gain that competitive edge over their competition. But
at what price?

Since then, Tuff Stuff has gone back to what we do best which is
provide accurate and fair card pricing for all the major sports along
with award-winning feature stories that keep collectors both informed
and entertained. SCD has done likewise in the vintage
collectibles arena and the only relationship our company has with the
grading services provided these days comes when we’re reporting about
them. And that brings us full circle to some recent headlines coming in
the aftermath of the Stephen
Strasburg SuperFractor card that has gained national attention
in last few weeks.

The 1-of-1 Strasburg card has been making national headlines since it
was found and then again after an eBay auction in which the card sold
for an amazing $16,500. The “winner” (never really bought the term
‘winner’ in terms of auctions, ‘buyer’ seems to be more accurate) of the
auction, Robert
Power, decided to capitalize on the hype surrounding the card and
had it graded by Beckett. Despite some noticeable flaws on the card that
included some prominent centering issues and some less-apparent issues
with the card’s edges, the card was awarded a near-perfect grade of 9.5.
Power then rode the wave of the media attention he received. His 15
minutes of fame culminated with an appearance on ESPN’s
“First Take” where he went out of his way to mention that he
had submitted the card for grading with Beckett and stated it would
probably take almost double what he paid for him to resell his treasure.

When a more coveted Strasburg 1-of-1 card, this time an autographed
version, surfaced and hit the auction block, Power was quick to pounce.
He put his $16,500 investment back on the auction block with his sale
running during the exact same time frame as the autographed version.
Coincidence? I think not. Was it a coincidence that Power plugged on the
airwaves and in newspaper articles that the card was being graded by
Beckett and then the card received a generous 9.5? Not bloody likely.
Not sure who either thought they were fooling with the “you scratch our
back we’ll scratch yours” approach to grading cards but it seems the
strategy has worked to perfection, as Power’s card is currently being
bid up to almost $5,000 more than he paid (with four days remaining in
the auction) for it and Beckett grading services will undoubtedly cash
in with some new customers via the free publicity they’ve received.

While Power’s tactics have been well received after many initially
questioned what would possess a man to pay that much for a new card of
an unproven pitcher, and one that didn’t even feature his autograph, the
same can’t be said for Beckett. It seems the company’s generous
grading policy may come back to haunt them in the long run in terms of
customers who will now be looking to take their business elsewhere. The
company quickly came under fire from angry customers who wanted to know
why the grading seemed to be much more stringent when it came to their
own examples than it did for Power’s high-profile Strasburg card. Many
questioned the company’s integrity and weren’t buying the responses made
by “grading experts” who awarded the 9.5 in a video featured on their
website.

And why would anybody buy it? It’s fairly obvious what happened here.
Whether their was a verbal agreement made between Power and Beckett
remains to be seen. But one thing is certain, both used the other to try
and benefit financially.

The nationwide publicity Strasburg and his cardboard had generated was
exactly the shot in the arm the industry needed. Good publicity and lots
of it for an industry with a long history of fraudulent companies and
practices. It’s unfortunate for the rest of us in the hobby that look to
promote our industry and all of its positive attributes that the
“partnership” the two parlayed will ultimately be viewed as yet another
black eye on a hobby that can ill-afford afford another blemish.

The comments below came straight from the Beckett website after
the company ran a video with the guys that graded the now-famous Stephen
Strasburg SuperFractor. Almost all of the posts made questioned the
company’s integrity and methods used in awarding the card a 9.5 grade
despite several noticeable flaws:

“This card did not deserve this grade plain and simple. How many other
collectors have submitted cards that are in better condition then this
card and did not receive the same grade. If your going to grade cards
their needs to be some sort of standard set. Not just hand out grades
based on the popularity of the card. It truly makes you question some of
the other cards that have been submitted. Are they really whats listed
on the slab. The whole credibility of grading has been compromised here.”

“I couldn’t agree more. What’s the point of spending money to have a
grade screwed up by these people, I think PSA is still reputable and I
think I will be using them from now on when I purchase cards or have
them sent for grading. This is a disgrace to see this happen to the
company that once set the standard, but now has slacked off.”

“Finally, there’s no way anyone from Beckett is NOT going to toe the
company line here. WE all know that this grade is a bunch of BS, but by
giving the card a 9.5, the phrase Beckett Grading Service is going to
be seen and heard by countless people who never even knew that card
grading even existed. This card could’ve been ripped in half, and
Beckett was going to give it a 9.5.”

“IMO, this seems nothing more than BGS trying to breathe extra life back

into the hobby, especially with a much controversial departure by Upper
Deck.  Imagine if they would have given him an 8.5 or lower overall?
What kind of spectacle it would have been….bad for not only the owner
but the hobby in general, especially for a card that hasn’t generated
this much media interest, since probably the t-206 Honus Wagner.

I’m
just disappointed…as a ‘respectable’ company you should remain
unbiased and impartial throughout.  This would essentially be synonymous
to the world’s largest white diamond being discovered and excavated
with obvious cloudy luster and littered with inclusions, then sent in to
GIA and still receiving a VVS1 grade.”

“If thats a 9.5 then every card in my collection is a 10. The centering
is HORRIBLE. 60/40 on a good day maybe. And plus how can you sit there
and talk about all the damage the card has and still grade it a 9.5.
They only reason beckett graded it a 9.5 is because it is The Strasburg
superfractor or the guy paid you some more money to grade it higher.
What a joke, this is why i don’t get my cards graded by beckett, its PSA
only If i get stuff graded.”

“This just pisses me off to no end. I am so angry that my 2 strasburg
chromes each got a 9. It is just unbelievable that they gave that a
9.5. I don’t know if they thought this video would help clear this
story, but to me, its just mad me more upset. What an awful job by the
graders and they should be ashamed at what they’ve done. For this card
and others that should have been graded higher. Now, im not saying
every card should be a 9.5 or a 10, but c’mon, don’t tell me this is 9.5

worthy. I guess one word to sum it up would be pathetic.”

“Here’s the problem they are not responding cause they know they did
wrong. Their whole integrity is gone. Plain and simple its sad, because
they used to be in it to help out the hobby with the collectors as their
priority. Now its about the money. I just feel bad for all those who
have sent cards in to be graded and they were given worse grades. I
don’t know if their is anything that can be done. Maybe a class action
law suit, but they could argue its a subjective opinion. There are so
many more cards out there thou that are direct proof that the Strasburg
card should be a worse grade, but who knows. I’m done with it to and I
hope people start to realize that BGS is now as trust worthy as GEM Mint
or that dude who makes his own slabs with a piece of tape as the label
in his garage.”